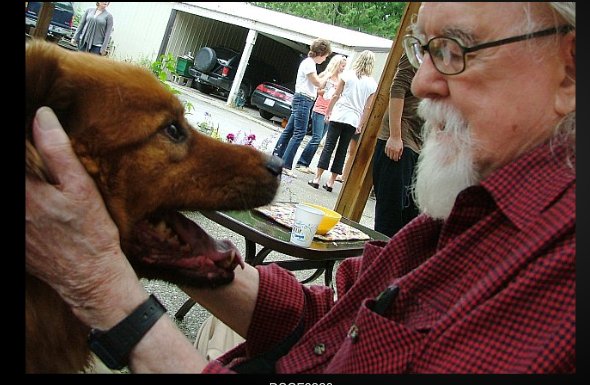 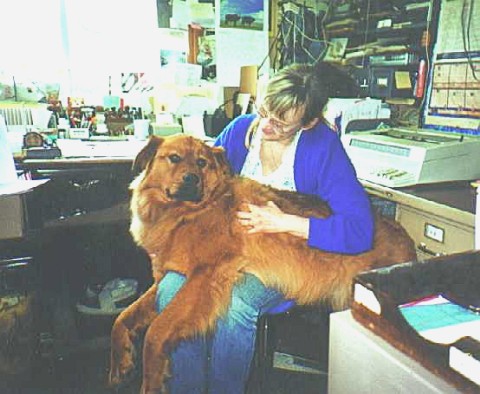 Share
Pin
Tweet
Email
When Rufus, the CAC guard dog of many years passed, the CAC staff went into mourning, but knew that if a new dog was to come into their lives, they did not have to go looking for him, he would come to them.

That’s what happened in the Spring of 2000 when they happened to stop by a little hippie bakery and saw a Polaroid photo of a big brown dog and a handwritten note that said:

Needs a good home immediately! Will go to dog pound in 2 days!

There was a phone number to call. Vikki called. A young man explained that his girl friend was the caretaker at Lewis and Clark State Park just off Interstate 5 north of Portland and the dog had been there for 2 weeks, hanging around a certain camping spot. She believed someone had deliberately left him there, because no one ever came looking for him.

Vikki got directions, and they drove 30 miles to this place and there they met “The Bear” sitting in a cage, waiting to go to the dog pound. He was a beautiful dog, shades of brown with a patch of black on the tip of his tail. He almost went crazy when Vikki approached the cage and he grinned and extended a long tongue through the bars and licked her hand as his tail buggy-whipped back and forth in expectation. It was love at first sight. The vet said he was part chow-chow and part golden retriever; about a third of his tongue was speckled purple. He weighed 65 pounds, and was about a year old.

The staff named him “Bear” because he looks like a big Teddy Bear. He is extremely gentle and affectionate, with bright searching, often mischievous eyes. He settled in quickly at the CAC office. Vikki takes him for a brisk walk every afternoon. Bear loves those walks. He has met all the dogs in the area and has marked almost every tree and bush along the route. As he has gotten older, the walks have become a bit less brisk, but he still insists on visiting the neighborhood.

When Vikki asked Will Berlinghof, then the CAC Tarot Reader, to check out the Bear, Will e-mailed her a long, detailed past life report that explained how the two of them had been together. In a past life as tribal Inuits living in the far North, Vikki, as a male hunter, was two days from the village with a dog sled and the lead sled dog (now Bear) and Vikki were attacked by a polar bear. Vikki was wounded and bleeding profusely and would probably die from loss of blood. The sled dog chased noisily around the bear, nipping him, and in the course of driving him off was hurt badly.

Nevertheless, as the lead dog, he knew his job was to get the sled back to the village and though crippled, he fearlessly took off through the snow with the hunter (Vikki) weak from loss of blood, collapsed in the sled. Though wounded, he managed to drag the sled back to the village, where their wounds were treated and both recovered. The dog could never again pull a sled. Usually, old wounded dogs were killed, but this dog was allowed to live because of his valiant nature. He sired lots of pups, and it was considered a great honor to have a dog of his line.

When the old dog finally died, the tribal shaman predicted his spirit would continue to protect and guide the hunter he saved (Vikki) throughout future lifetimes, which he did. Now he is back in Vikki’s present lifetime as “Bear”, thus his great happiness and devotion to her. It was supposed to be this way.

Bear With His Dog Food