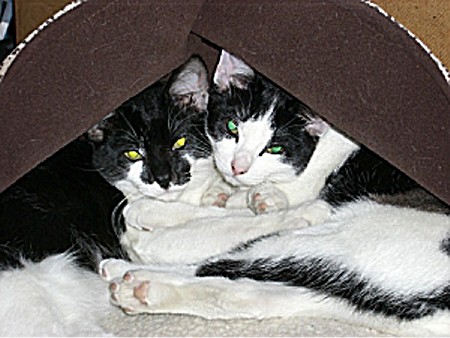 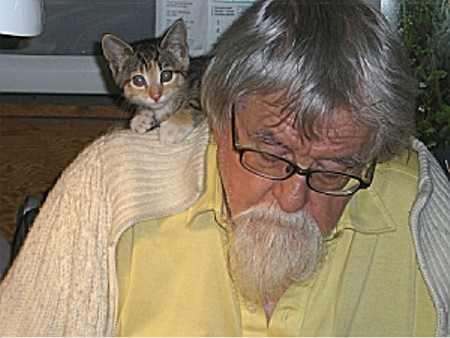 You cat lovers will be happy to hear that the CAC cat population has now tripled. Molly Longtail manifested in July. She was a kitten delivered by my granddaughter, and I am now convinced Molly is the reincarnation of Nancy, my favorite late night companion at the shop, because she follows her old routine to a T.

But that’s not even the half of it! Around the 4th of July, Vikki and I had just returned from a night of dancing to our favorite local band, Roadhouse, at the Log Cabin Tavern, and as we were walking down the trail to our house, I thought I heard a cat’s terrified meowing coming from deep inside the woods. We both stopped but did not hear it again. Vikki said I must be imagining. The next night Vikki phoned me from the house. “Avaton, I think that was a cat you heard last night because I heard one too, just now walking down to the house. It was really faint and sounded scared. When you come down tonight would you bring a flashlight and check around in the woods?”

At two AM I did, but I didn’t see anything except the eyes of two racoons on a limb of a huge maple tree. The next morning I started up the path leading into the woods, calling “Here, Kitty, Kitty”

Fifty feet into the woods I could now hear a persistent meowing coming from a large clump of maidenhair ferns. I approached, and hidden inside saw two little terrified eyes peering up at me. I reached down and withdrew a tiny quaking little kitten, which I petted and who clung to my chest as I followed the trail out of the woods. I dropped the kitten into the lap of an astonished Vikki sitting at her computer. She fell instantly in love with this velvet-soft little creature with such beautiful blue eyes and named him Julius, for Julius Caesar, because he has a large rump and would fall over backwards every time he tried to jump into her lap. When Molly Longtail spotted him, she arched her back and hissed. After all, he was in her shop and she was the first cat in a long time, even if she only arrived two days earlier.

That night while walking with Bear down to the house, I was astounded to hear a piercing “yowl” coming from deep within the woods. We stopped, I cocked my ears, the Bear bristled and huddled against my leg. We heard the cry one more time but it was fainter and even further away. For a moment I wondered if that cry could have come from Julius but then I remembered seeing him curled up fast asleep inside Vikki’s open purse sitting on the floor next to her computer. No question, there was another very frightened cat out there in the woods and I intended to track it down when daylight came. It was hard trying to sleep because my head was going and I kept remembering that woeful terrified cry out there. I wondered if a mother cat lived out there somewhere in that rainforest and had built her nest under a log and had her kittens in that cold and wild environment. Had someone deliberately dumped her or her kittens and she hauled them into the woods for safety?

Vikki and I had talked about that as Julius cuddled in her lap. We had never seen a cat like him before in the neighborhood, in fact we had never seen a black and white cat around here. For years we, have been taking the Bear for a daily walk and intimately know and recognize animals along the various routes. There are numerous cats on lawns and porches who silently regard the Bear with a leery eye as we pass, but no black and white ones, so we deduced Julius and his parents were not from this area and most probably dumped.

I left at 10, my usual time, knowing it was a Thursday, and Vikki would not be there. I quickly started up the trail into the woods, fully determined to find that cat. Thirty feet into the trees I called, “Here, Kitty, Kitty” and immediately came a loud mewing response; and from beneath a huckleberry bush out scampered another little black and white kitten, almost the spitting image of Julius. It was frightened, hungry and terrified from that long ordeal. I picked it up and it began to purr and clung to my chest. I looked briefly around to see if I could find a nest or a mother cat around but not a sign of either. When I opened the door, there sat a welcoming committee of Molly Longtail and Julius looking up at us.

I set the little kitten down and immediately she and Julius came together and started licking each others little face. The next moment their little feet were locked around each others neck and they were playfully rolling around on the floor. The new kitten was so soft and melted into my chest when I picked it up so I named it Maggie (after an old girlfriend years ago who did something similar).

Like Molly, we figured our new little cats were two months old. They were so soft, gentle, affectionate and social, their little motors purring continuously. They are groovy and wonderful little creatures, full of life and playful energy and they have raised a literal hell of continued mischief that has forced us to change our routine. They love to explore, scampering from desk to desk kicking and littering papers, books, pens, paper clips, staplers, purses, clothes, bottles of pills etc.

They have discovered every cord and string, and have learned how to leap up, grab the cord with their claws and in the descent manage to switch on the light or whatever the cord controls. One morning, for example I was disturbed when the light above me flashed on and off several times. I looked up and there was Molly Longtail high atop a shelf pulling the light cord up and down with her paws. Since then, I have been forced to shorten all cords in the shop.

Vikki always rises much earlier than I and opens the storage room door, and the thundering herd of little cats start their day of carnage by galloping through the shop. She has a regular routine with the Bear where he eats and runs wildly amok back and forth through the building growling and snorting with an open can of dog food clenched in his teeth. When this occurs the little cats dive for cover, and when the spectacle ends they all come out and roll around on the floor beneath the Bear, playing with his feet and batting at his tail. Bear really likes them, they are bewitching. He often sits in a corner and watches as they tear around playing, batting games with their toy mouse or ball. Sometimes he stretches out by the furnace and the little cats swarm over him, batting at his ears and tails. The only time he has ever growled at them is when he finds them eating out of his dogfood dish. That’s a no-no!

When they were around 3 months, old Vikki hauled them to the vet to be fixed. This was accomplished without a hitch but the vet surprised us by revealing that Julius was a female. So all three of our new little cats are girls, which probably explains why they are so gentle and easy going. We had not been able to determine the sex of them ourselves, but Vikki had promised if it turned out Julius was not a male, that I could rename him, which I did and he/she became Mabel. So we have the three M’s—Molly, Maggie, and Mabel and together they rule the CAC headquarters and keep us workers laughing and happier than we have felt in years.

I could go on but this is enough to introduce our new little family to those many readers who persist in asking for more information on what’s going on around here and particularly “more stories about your animals!” I’m almost certain there will be more to tell in later reports from yours truly. So this shall do it for now.

Yours in the service, for CAC… Avaton